Monday 28th July 2008
I started stripping the car down for the Duratec transplant. First job was to remove the front tie bars, so I could inspect the damage from Snetterton. Oh boy, I had a lucky escape.

The really disappointing thing is that Performance Ford magazine asked me to take part in the Ford Fair show at Silverstone this weekend, in some on-track action. They're doing a piece called Fastest Fords which features the fastest Fords in Europe on track at the same time. Maybe they'll ask me back next year when the XR2 has Duratec power.... Saturday 25th July 2008
The Snetterton Track session on Thursday was a lot of fun. I managed a 1m27s run, and my best theoretical time according to the data logger would have been 1min26s. When I turned up I inspected the front tie bars, and spotted that the near side bar had a crack in it, but I decided to go out on the track anyway. Noise limit was 105db, and I recorded 98db at 4500rpm. Seems the higher I revved the engine, the quieter it got. I went out in three 10 lap sessions, and overtook many cars. The Fiesta had a really bad vibration which I presumed was the front tyres, so I went back to the pits and swapped the front and rears around, which improved things a little, but I believe now that the vibration was from the instability caused by the movement in the suspension. On my final session, after a little enthusiastic kerb hopping, I spotted that the steering wheel was no longer pointing in a straight line when going straight, so I pulled off in to the pits and found that the tie bar was foobared. So I called it a day at that point.

So no real harm done. My top speed recorded on the now working DL1 Datalogger was 112MPH, and it was a satisfying final outing for the 2.0 Zetec. The Fiesta is now in the garage, ready for me to start removing the Zetec, and I'll get the suspension fixed once I've got the Duratec engine installed.

In car video footage can be found on Youtube


And its all change at work apparently. Theres a re-org in progress, and I've been summonsed to see one of the directors with HR present, to discuss options. Here we go again.... Sunday 20th July 2008
I'm selling a few Zetec and Duratec parts on Ebay. The Rutland modified 2.0 Zetec head with 33.5 and 30.0mm valves. The standard 2.0 head off the engine I bought in February. The 2.0 Cams from the same engine, and the 2.0 Throttle Body. And from the Duratec I'm selling the inlet and exhaust manifolds, the air conditioning compressor, and the Duratec ST engine cover.

I stripped the Duratec wiring loom last night. Cut off all the connectors I'll need to use when I make the new wiring loom. Monday 14th July 2008
So the Duratec project will really commence in August. I have a Track Day at Snetterton on July 24th, then I'll be at Silverstone for Ford Fair on August 3rd. Once Ford Fair is out of the way, the Zetec will be removed from the XR2 and the fitment of the Duratec will begin. In the mean time, I've fitted the replacement datalogger. And I've found a Ford website which has literature on their existing range of engines, including the Duratec DHE420 engine which I'm using.

Here are Ford's dimensions of the Duratec DHE420 engine 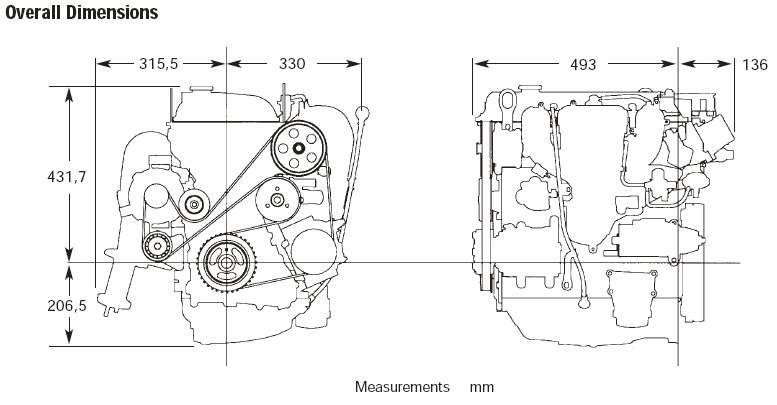 Did you know that Subaru have now put their Diesel Boxer engine in to production?
Boxer Diesel website

And did you know that a Mk1 Fiesta is currently under construction, featuring a Subaru engine and 4WD system?
Subaru Fiesta Mk1 Sunday 13th July 2008
The approximate dimensions of the Duratec engine are as follows:
Height (bottom of sump to oil filler cap) is 65cm
Width (front to back) is 35cm
Length (crank pulley to gearbox face) 49cm

Monday 7th July 2008
Collected the Duratec engine and gearbox on Sunday. The engine has a manufactured date of 2008, so it is the very latest 2.0 for the Fiesta ST. I'll strip it down on Tuesday evening.

The Seat Leon FR goes back to Seat UK tomorrow. I drove over 300 miles in her today, and I dont think I could survive 60,000 miles, as the ride is far too hard, the cabin noise is very high, and she's just not economical enough for me. Goes well though, and is a hoot to drive hard. She's not a tourer by any means though, and I'd prefer something a little less conspicous to drive too. Overall, she's a great weekend car, but a little too frantic when you start to push her hard. Saturday 5th July 2008
I'm collecting a brand new Fiesta ST150 engine and gearbox tomorrow. This is the 2.0 Duratec I mentioned below. It has been run for a few hours only on a Dyno. And according to Quaife, only the ATB LSD will transfer from my BC box in to the new IB5+ box, so I'll have to invest in a gearkit for the new box.

Congratulations to Donington Park race track, which is going to be the host of the Forumula 1 GP for Gt Britain for the next ten years from 2010.

I've a brand new Seat Leon FR 550 sat on the driveway at the moment, which is on loan from Seat UK. I'll be testing it over the next five days with the prospect of choosing a Leon for my new company car. The FR550 has leather seats and 18" alloys. Its a 2.0 Diesel with 170BHP, so I'll be checking the fuel consumption figures on my trip to Crawley on Monday. Its black with black leather, and looks geat. But looks aren't everything.
« Prev archive/jul 2008 Next »