If you want information on how to modify a FWD linkage, to reduce play (especially if you have already fitted the B&M #45096 short shifter), check the guide.

Dismantling the Quaife BC gearbox

Click here for a pictorial guide on dismantling the Quaife BC gearbox.

Using the Zetec with front and rear wheel drive gearboxes

One of the most common questions I'm asked is, "what gearbox can I fit to the Zetec engine?", and its a perfectly valid one, which I can hopefully answer below. If you're installing the Zetec in to a kitcar, or any other car, perhaps even a historic or classic car, then this guide should go some way to help you make your decision.

Ford (being the sensible people that they are) decided to stick to the same bellhousing pattern that they have stuck to since the 1960s. So for a rear wheel drive (RWD) application, you can use the Type-9 five speed box from the Sierra, plus an RS2000 bellhousing. One simply bolts to the other. Note: The Type 9 has a 1" 23-spline input shaft and the 2000E four speed box has a 7/8" 20-spline input shaft. The MT-75 (Granada) or T5 (Sierra Cosworth) gearboxs also fit on the Zetec.

The Silver Top flywheel should be used, as the later dual mass flywheel on the Black Top Zetec's isn't suitable due to their size and weight. The flywheel will need re-drilling to accept a Pinto clutch. Keep the Mondeo Zetec clutch cover. Use a sierra 1.8 CVH friction plate. Fit a ford spigot bearing, change the clutch release bearing to a capri part CT133 Quinton Hazel (available from most motor factors). A new spigot bearing costs approx £10 from Ford. For FWD applications, you should use an AP Racing 220mm clutch and clutch cover.

You can get away with using a standard Zetec FWD clutch for RWD applications but, as the fulcrum point for the clutch release arm is in a different place on FWD cars, you'll find that in a RWD vehicle the clutch pedal will only have half its normal travel.

Since 2011, I've been running the Quaife sequential box for the Duratec (IB5+) engine. I have one of the two prototype boxes built by Quaife. The other box went to Ford in Germany for evaluation apparently. My box looks identical to the production variant, though it may have slightly different internals. It was supplied with the bowden gear change cable, gear lever mechanism, gear position sensor and digital gear display. Fitting was quite straight forward. The biggest issue was where to route the gear cable, as it has to pass forward through the bulkhead, over the engine, and down to the front of the car. The cable provided was far too long, so Quaife then sent me another, shorter custom length cable. I've had a platform made, for the lever to sit on, to bring the lever up to my height when sat in the car. I'm not using the clutch anymore for up changes. Instead I rely on the release of torque on the box, by cutting the ignition as the lever is pulled back. This allows clutchless changes.

I'd like to fit a pneumatic changer, with throttle blipper, to make the unit fully automatic. Wrestling the car up the hill, takes maximum concentration, and even the sequential gearbox, although it takes the errors away from making changes, it still distracts the driver. Paddles or fully automatic changes would make for a far better experience.

In 2014, Quaife announced the QKE38Z, which is the Zetec version of their FWD Ford Sequential gearbox. Head on over to the Quaife site for more details. 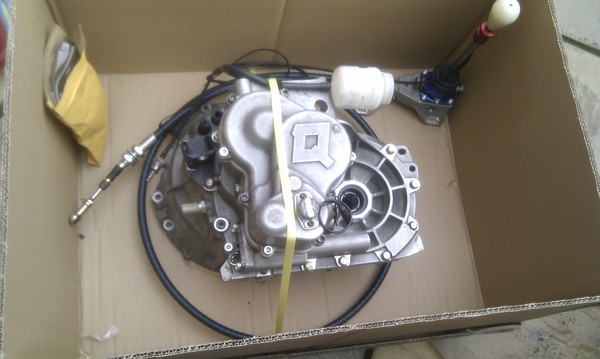 4 speed single rail gearbox, used for more demanding applications than the Type 3 box. It is available with or without an integral bellhousing. Often referred to as the 'Rocket' box. (Rocket was the name of the original close-ratio competition gearbox that was based on the Type E).